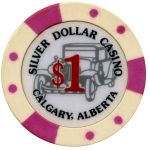 This casino was originally called the Tower casino and operated out of the CN Tower in Calgary, Alberta, until it relocated to the south part of the city and changed its name to the Silver Dollar Casino. The chips transferred over, and as such, are generally in terrible shape.